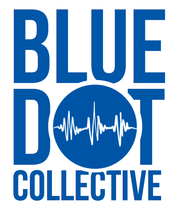 Blue Dot Collective is dedicated to composing new works for wind band that are well-crafted, compelling, sincere, exciting, and fresh. 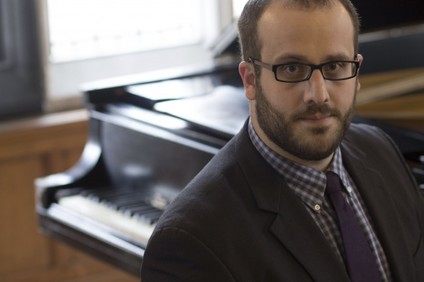 Composer David Biedenbender’s music has been described as “simply beautiful” [twincities.com] and is noted for its “rhythmic intensity” [NewMusicBox] and “stirring harmonies” [Boston Classical Review]. “Modern, venturesome, and inexorable…The excitement, intensity, and freshness that characterizes Biedenbender’s music hung in the [air] long after the last note was played” [Examiner.com]. David has written music for the concert stage as well as for dance and multimedia collaborations, and his work is often influenced by his diverse musical experiences in rock and jazz bands as an electric bassist, in wind, jazz, and New Orleans-style brass bands as a euphonium, bass trombone, and tuba player, and by his study of Indian Carnatic Music. His present creative interests include working with everyone from classically trained musicians to improvisers, acoustic chamber music to large ensembles, and interactive electronic interfaces to live brain data. He has had the privilege of collaborating with and being commissioned by many talented performers and ensembles, including Alarm Will Sound, the PRISM Saxophone Quartet, the Stenhammar String Quartet, the New Jersey Symphony Orchestra, the U.S. Navy Band, Philharmonie Baden-Baden (Germany), VocalEssence, and the Eastman Wind Ensemble, among many others.

He is currently Assistant Professor of Composition in the College of Music at Michigan State University. He holds degrees in composition from the University of Michigan and Central Michigan University, and has also studied at the Swedish Collegium for Advanced Study, the Aspen Music Festival, and in Mysore, India where he studied carnatic music. For more information, visit: www.davidbiedenbender.com. 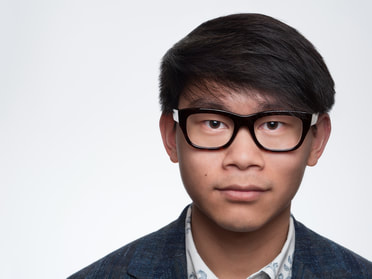 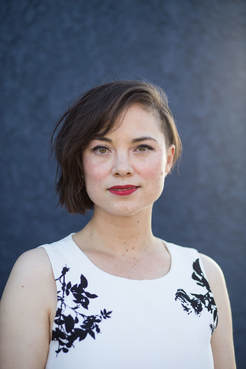 Composer Jennifer Jolley’s diverse catalog includes choral, orchestral, wind ensemble, chamber, and electronic works. She has been commissioned by ensembles and institutions across the United States, including the Vermont Symphony Orchestra, University of Texas at Austin, Bowling Green State University, Quince Contemporary Vocal Ensemble, The Canales Project, Left Coast Chamber Ensemble, among others. She is Assistant Professor of Composition at Texas Tech University in Lubbock, Texas, and has written articles for the e-zine NewMusicBox.

In recent years, Jennifer has been increasingly drawn toward subjects that are political and even provocative. Her 2015 collaboration with librettist Kendall A, Prisoner of Conscience, sets to music statements made by the Russian punk-rock band Pussy Riot as they stood trial in Moscow for “hooliganism” and “religious hatred.” Quince Ensemble has performed the piece widely and has released a recording on their album Motherland with New Focus Recordings. Jennifer’s 2017 piece The Eyes of the World Are Upon You, commissioned by the University of Texas at Austin Wind Ensemble, reflects on the first-ever campus shooting in America, which took place at UT-Austin in 1966.

Jennifer’s blog—on which she has catalogued more than 100 rejection letters from competitions, festivals, and prizes—is widely read and admired by professional musicians. She is particularly passionate about this project as a composition teacher, and enjoys removing the taboo around “failure” for her students. In addition to her professorship at Texas Tech, she is a member of the composition faculty at Interlochen Arts Camp.

Jennifer deeply values the relationship that is created between composers and the communities with whom they collaborate. She has been composer-in-residence at Brevard College, University of Toledo, and the Vermont Symphony, and was in-residence at the Central Michigan University School of Music and the Alba Music Festival in Italy in 2018. She will be the Composer-in-Residence of the Women Composers Festival of Hartford in 2019.

​Jennifer Jolley took 2nd Place for the 2017–18 American Prize in Composition (Band/Wind Ensemble Division) and was a finalist for the the Symphony Number One Call for Scores. She holds degrees from the University of Southern California and the Cincinnati College-Conservatory of Music, where her principal teachers included Stephen Hartke, Frank Ticheli, Michael Fiday, Joel Hoffman, and Douglas Knehans. Explore her music at jenniferjolley.com 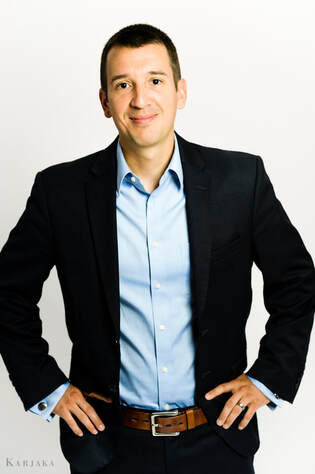 The music of Benjamin Dean Taylor (born 1983), has been described as “elegant and energetic” (Kenneth Thompson) and “powerful and direct with delightful surprises in each work.” (Marilyn Shrude) Taylor has received commissions from ensembles including the Calidore String Quartet, Omaha Symphony, Solaire Saxophone Quartet, New World Youth Symphony, and the Detroit Symphony Orchestra Civic Wind Symphony. As a sought-after composer for wind band, Taylor has been commissioned by over 75 band directors of players at all educational levels. Recently named a recipient of his third commission from the Barlow Endowment, Taylor’s prizes and honors include Winner in the 2013 Ticheli Composition Contest, a grant from the Indiana Arts Council (2015), Dean’s Prize in Composition from Indiana University (2013), and a BMI Student Composers Award (2011).

Benjamin Taylor delivers intensely personalized musical experiences that are helping audiences and performers reconnect with new music.  For example, he gave one wind band the opportunity to witness their conductor in action as a featured soloist, and the students got so enthused about giving the world premiere that the entire school celebrated one Friday as "bacon day" in honor of the piece, "Epic Bacon Funk."  Taylor completed a doctorate degree (DM) from Indiana University and holds degrees from Bowling Green State University (MM) and Brigham Young University (BA). Explore his music at benjamintaylormusic.com 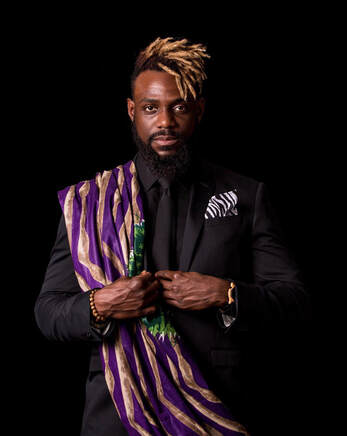 Described as "elegant, beautiful, sophisticated, intense, and crystal clear in emotional intent," the music of Omar Thomas continues to move listeners everywhere it is performed. Born to Guyanese parents in Brooklyn, New York in 1984, Omar moved to Boston in 2006 to pursue a Master of Music in Jazz Composition at the New England Conservatory of Music. He is the protégé of lauded composers and educators Ken Schaphorst and Frank Carlberg, and has studied under multiple Grammy-winning composer and bandleader Maria Schneider.

Hailed by Herbie Hancock as showing "great promise as a new voice in the further development of jazz in the future," educator, arranger, and award-winning composer Omar Thomas has created music extensively in the contemporary jazz ensemble idiom. It was while completing his Master of Music Degree that he was appointed the position of Assistant Professor of Harmony at Berklee College of Music at the surprisingly young age of 23. He was awarded the ASCAP Young Jazz Composers Award in 2008, and invited by the ASCAP Association to perform his music in their highly exclusive JaZzCap Showcase, held in New York City. In 2012, Omar was named the Boston Music Award's "Jazz Artist of the Year." He is currently on faculty in the Music Theory department at The Peabody Institute of The Johns Hopkins University in Baltimore.

Omar's music has been performed in concert halls the world over. He has been commissioned to create works in both jazz and classical styles. His work has been performed by such diverse groups as the Eastman New Jazz Ensemble, the San Francisco and Boston Gay Mens' Choruses, and the Colorado Symphony Orchestra, in addition to a number of the country's top collegiate music ensembles. Omar has had a number of celebrated singers perform over his arrangements, including Stephanie Mills, Yolanda Adams, Nona Hendryx, BeBe Winans, Kenny Lattimore, Marsha Ambrosius, Sheila E., Raul Midon, Leela James, Dionne Warwick, and Chaka Khan. His work is featured on Dianne Reeves's Grammy Award-winning album, "Beautiful Life."

Omar's first album, "I AM," debuted at #1 on iTunes Jazz Charts and peaked at #13 on the Billboard Traditional Jazz Albums Chart. His second release, " We Will Know: An LGBT Civil Rigths Piece in Four Movements," has been hailed by Grammy Award-wining drummer, composer, and producer Terri Lyne Carrington as being a "thought provoking, multi-layered masterpiece" which has "put him in the esteemed category of great artists." "We Will Know" was awarded two OUTMusic Awards, including "Album of the Year." For this work, Omar was named the 2014 Lavender Rhino Award recipient by The History Project, acknowledging his work as an up-and-coming activist in the Boston LGBTQ community. Says Terri Lyne: "Omar Thomas will prove to be one of the more important composer/arrangers of his time." 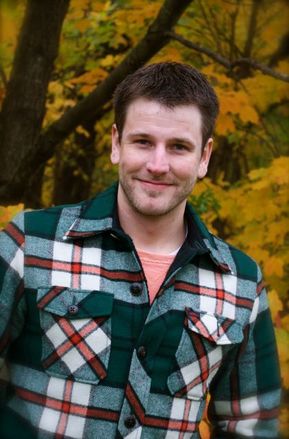 Jess Langston Turner composes contemporary instrumental and choral music. He began his musical training with piano and trumpet lessons and in high school developed an interest in composition. He earned both a bachelor’s and master’s degree in trumpet performance from Bob Jones University in 2006 and 2008. From 2008-2011 he attended the Hartt School of Music in Hartford, CT, where he earned a master’s degree in composition and was named a Regent’s Scholar. In May 2015 he completed a DMA in music composition at Indiana University in Bloomington, Indiana. Throughout his undergrad and graduate years, Turner completed a variety of composition projects, several of which have been recognized for national awards, including first place in the Music Teachers National Association Young Artist Composition Award, finalist in the ASCAP Lotte Lehmann Art Song Composition Competition, winner of the John Ness Beck Award for Choral Composition, finalist for the Morton Gould Young Composer Awards, winner of the 2011 Walter Beeler Memorial Prize, and most recently winner of the Merrill Jones Composition Contest for Young Bands. In 2010, he was invited to participate in the National Band Association's Young Composer Mentor Project. In recent years he has served as visiting composer for numbers of schools and universities, including Stephen F. Austin State University, The Hartt School, The University of Wisconsin – LaCrosse, and The University of New Mexico. 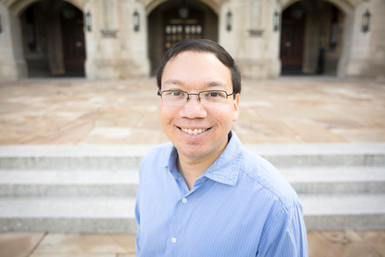 Roger Zare has been praised for his “enviable grasp of orchestration” (New York Times) and for writing music with “formal clarity and an alluringly mercurial surface.” He was born in Sarasota, FL, and has written for a wide variety of ensembles, from solo instruments to full orchestra. Often inspired by science, mathematics, literature, and mythology, his colorfully descriptive and energetic works have been performed in five continents by such ensembles as the American Composers Orchestra, the Minnesota Orchestra, the Sarasota Orchestra, the Australian-based Trio Anima Mundi, the Donald Sinta Quartet, clarinetist Andy Hudson, and the New York Youth Symphony. His concerto for clarinet and wind ensemble, Bennu's Fire, was commissioned and premiered by Alexander Fiterstein and the California State University Northridge Wind Ensemble at the 2011 International Clarinet Association ClarinetFest in Los Angeles. An award winning composer, Zare has received the ASCAP Nissim Prize, three BMI Student Composer Awards, an ASCAP Morton Gould award, a New York Youth Symphony First Music Commission, the 2008 American Composers Orchestra Underwood Commission, a 2010 Charles Ives Scholarship from the American Academy of Arts and Letters, a Copland House Residency Award, Grand Prize in the inaugural China-US Emerging Composers Competition, and many other honors. His band work, Lift-Off (grade 4), won the third Frank Ticheli Composition Competition and is published by Manhattan Beach Music. Zare holds a DMA ('12) from the University of Michigan, where he studied with Michael Daugherty, Bright Sheng, Kristin Kuster, and Paul Schoenfield. He also holds degrees from the Peabody Conservatory (MM '09) and the University of Southern California (BM '07), and his previous teachers include Christopher Theofanidis, Derek Bermel, David Smooke, Donald Crockett, Tamar Diesendruck, Fredrick Lesemann, and Morten Lauridsen. Zare serves as instructional assistant professor of composition and theory at Illinois State University. Explore more of his music at rogerzare.com